From April 13, until ends of May I will be every Friday night as aerial dancer at the Astoria’s dinner show.

The Cinderella show at the Coliseum Theatre

From 6 until 22 of July I will be playing The cinderella role at the Cinderella show, with the company "La Fiesta Escénica" at the Coliseum Theatre (Barcelona). 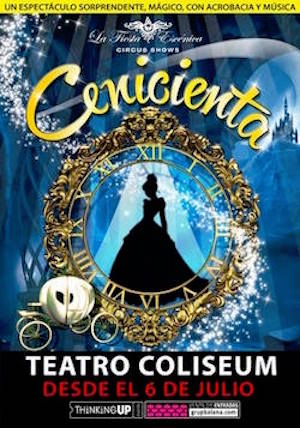 On 22 April, I had the pleasure to make an aerial hoop & oriental dance performance fusion for the patron saint festivities.

On 11 March, I was performing in the Molino theatre celebrating 25 years of there Paddock Bar.

From February 10, until ends of April I will be every Friday as dancer and aerial acrobat at the "La Diosa" Sabadell restaurant dinner show.

Dancer and aerial acrobat during December and January in the American Circus.